At one time an RV meant only one thing: a camper. An axle with two wheels and an enclosed body built on a trailer chassis. An RV was usually built by amateurs to be modestly sized. Dry weights and load limits weren’t even a thing. The tow vehicle was whatever vehicle you currently owned. Plenty of undersized transmissions gave up the ghost in far flung locations after pulling campers adorned with lots of real (and real heavy) wood décor and kitchen cabinets designed for a traditional house on a stone foundation. 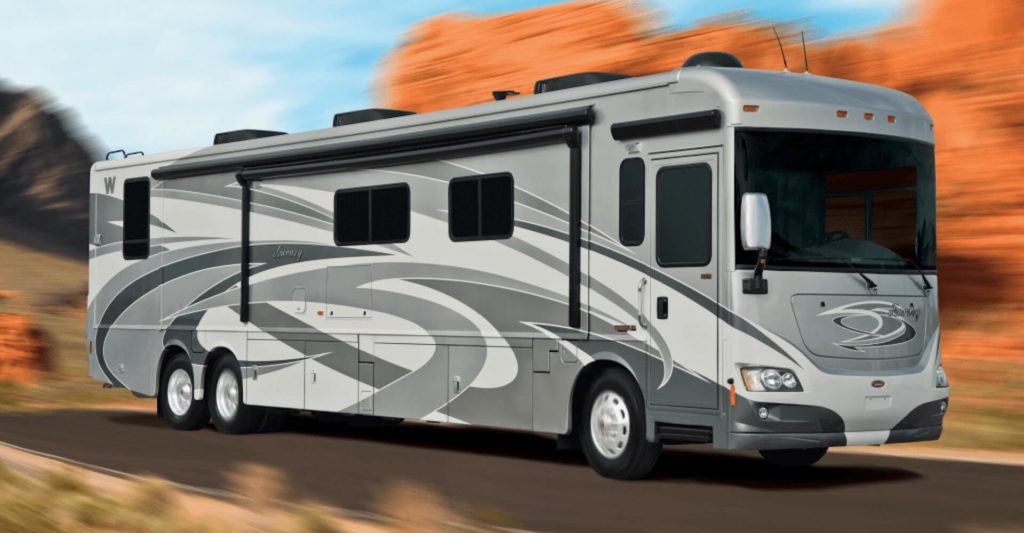 Regardless, these early prototypes proved popular enough that the first RV manufacturers began to pop up across the country. Many appeared and disappeared, others prospered in a small local way. A few, like Wally Byum’s Airstream, grew and expanded, and grew and expanded more until they were readily available nationwide.

Choosing the type of RV that best meets your needs is a big part of choosing the right RV. Approximately 70% of first time RV owners feel they bought the wrong RV for their needs, while less than 30% of second-time owners regret their current RV. This is an expensive lesson to learn the hard way. A little research now can put you in the right RV the first time.

An RV that fits your lifestyle will not only be used more frequently but one purchase from the RV dealer instead of two can save you thousands of dollars.

The Breakdown in Types of RV Classes

This is just what it sounds like, a small, sandwich-shaped towable with a roof that is extended once you reach your destination. This provides a soft-shelled, tent-like camper. Typically, the sides fold out as well, providing dual bunk space. Amenities are crude: a table and a small sink and fridge. Some pop-ups use a tiny cassette-toilet that is usually avoided in lieu of the campground facilities. A step up from tent camping and most popular with first time RV owners and small families on a budget. Well suited to weekend trips and occasional vacation duty. 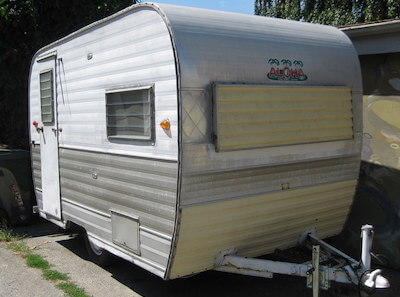 This is the closest thing there is to the original “Camper.” Now travel trailers range from small (capable of being pulled by the family car) to mammoth (requiring an eight to ten cylinder diesel truck). Today’s models run the gamut from very affordable (with interiors as spartan as a pop-up) all the way to full-sized with interior décors as stylish and opulent as a Manhattan condo. The advent of slide-outs changed the face of travel trailers forever, adding much needed floor space to even the smallest units. Some of the largest travel trailers now feature up to six slide-outs. 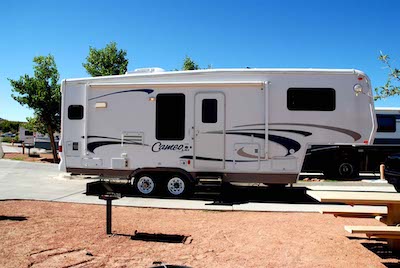 An evolution of the travel trailer, the fifth wheel arrived as a quirky idea that had some undeniable benefits. A typical travel trailer is hitched to the rear bumper of the tow vehicle and has a turning radius slightly smaller than an aircraft carrier. Also, mounted well behind the tow vehicle, it can provide some white-knuckle here-we-go moments in windy conditions or on winding roads. A fifth-wheel, on the other hand, is typically mounted in the middle of a pick-up bed, making for a more cohesive relationship between the tow vehicle and the trailer. Road manners are noticeably better with a fifth wheel, especially when comparing the larger units.

The fifth wheel is the preferred vehicle of choice for those traveling long distances and/or for extended periods of time. Many are built with high-end components and beefed up framing, electrical, and plumbing systems well suited to Snow Bird or Full Time travel. The downside is that an amply powered tow vehicle is often required, necessitating the purchase of not just the RV but also a brawny truck to tow it.

Available in both travel trailer and fifth-wheel configurations, the toy hauler is basically a camper with a garage. In one of those “why didn’t someone think of this years ago?” revelations, toy haulers were an immediate hit when they first started appearing a decade or so ago. Today, almost every manufacturer has a hand in the toy hauler game, with some offering dozens of variations. Obviously a niche RV (people that have no interest in vacationing with dirt bikes, four wheelers or snowmobiles typically aren’t willing to give up valuable living space for a garage), the niche is still big enough to make the toy hauler currently the fastest growing segment of RV. The RV industry has taken pains to bring younger buyers in to the RV lifestyle in recent years and the toy hauler has done more than anything else to help with this.

A completely different animal than the towables discussed above, the motorhome is exactly what it sounds like: a camper mounted on top of its own tow vehicle. When considering the combined cost of a fifth-wheel and a new tow vehicle, some buyers decide to kill two birds with one stone by moving in to the motorhome market. Available in a wide range of classes (A, B, B+, C, C+), we break these down in more detail here. Beyond classes the biggest decision facing people considering a motorhome is choosing between gas or diesel power. Gas engines are cheaper, less fuel efficient and have shorter lifespans. Diesel, on the other hand, is noticeably -sometimes startlingly- more expensive but provides impressive MPG and can provide hundreds of thousands of miles of reliable service. For Weekender or Vacation travelers, diesel power is rarely worth the cost of entry. For Snow Birds and Full Timers, diesel is often the only option.

Got Questions on RV Classes?