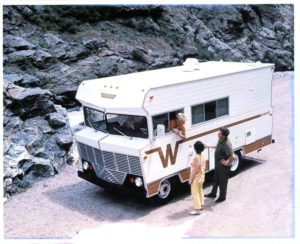 Shopping for a motorhome used to be a pretty simple task. There were no rv classes and sub-classes to speak of and when you mentioned the word motorhome, most people immediately pictured something like the Winnebago Chieftain: a ponderous beast with the road manners of a lumber truck and a turning radius slightly smaller than an aircraft carrier. Interior space was surprisingly roomy, but with no available slide-outs, what you saw was what you got. Aerodynamics were still something that only applied to aircraft, and the mighty Chieftain had the profile of a shoe box.

However, they sold like hotcakes and were used for everything from weekend getaways to cross country expeditions. Over time, though, it became obvious that one size did not fit all. Solo and couple travelers found they didn’t necessarily want or need something as big as the Chieftain. In addition, the oil embargo of the 70s made American buyers consider fuel efficiency for the first time.

Mirroring the auto industry –itself caught off guard with a lineup too big and thirsty for changing tastes- smaller, more fuel-efficient motorhomes began to appear. Motorhome classes began to appear for the first time to meet the need to differentiate between two different animals of the same species.

Unfortunately, hindsight suggests there could have been a simpler way to label the new segments (A to Z comes to mind), but we ended up with Class A, B, B+, C and C+. Adding to the confusion, not everyone is on the same page regarding the classes. Some manufacturers will refer to a model variously as a B and then further down the same page, a B+.

So, let’s break down these RV Classes in a brief tutorial that can start you on your way to finding the best RV for your needs:

The granddaddy of motorhome RV classes. Full sized and geared toward larger families or those who travel full time or spend their winters down south. Available in gas or diesel power, most Class A coaches feature rear mounted engines, but there are front mounted engine versions. The giveaway is a large boxy console (referred to in RV lingo as a “doghouse”) between the two front seats. Also, they are built on a heavy-duty truck or commercial bus chassis.

Just to keep things confusing, the farthest thing from a Class A is a Class B, also known as a camper-van. The typical Class B begins life as a stock van (i.e. utility van or full-sized family van). It is then retrofitted with beds, small kitchen, smaller bathroom, and in recent years, even a slide-out. It is ideal for the solo camper or happily married couple. The Class B is easy to drive, fuel efficient (relatively speaking), and appeals to those comfortable living and working in small spaces.

With 26 letters in the English alphabet, it’s hard to say why the RV industry felt compelled to cram their various classes in to the first three letters. The B+ either starts with the same chassis as a Class B or utilizes a more industrial cut-away chassis. It is then fitted with a larger camper body. B+ is just what it sounds like, though: a bigger Class B. It still uses a front mounted engine and offers more living space.

Slide-outs are much more common in a B+, and the driving experience requires a bit more attention since the vehicle behind you is now both wider and taller than the cab where you’re seated. A simple way to quickly differentiate a B from B+, is to look at the body profile; if the original van body remains intact, it’s a Class B. If the van body has been replaced with a larger camper body, it’s a B+.

There are even manufacturers who are vague on the difference between a B+ and a C. Don’t beat yourself up if you’re looking at one and find it referred to as another in the literature. We’ve seen manufacturer websites that refer to the same motorhome as a C on one page and then a B+ on another. Basically, a C is a bigger Class B+, with enough common traits to blur the line between the two. However, a C is distinctly different from a B, so there should be no confusion there. The Class C tends to have a beefier cut-away chassis, a bigger shell with cab-over bunk space, and sometimes a larger engine. Diesel power is more common in a C than the B+.

These bruisers are easy to spot from a distance but are the rarest of all motorhomes. Built on a heavy-duty truck chassis with front engine power under a huge snout like hood, the C+ is popular on the racing circuit as a home base for race car drivers and their crews. Known for opulent decors and flashy paint schemes, the C+ is closest to a Class A in price and size. It looks nothing like the boxy, toaster-on-wheels most people associate with the Class A. The C+ looks like a semi cab with a large custom body shell.